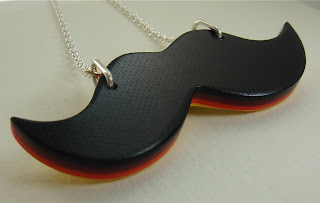 G-10 Rainbow Layered Stache
We are just back from Las Vegas.  Anyone who knows me, knows Vegas is not my scene.  The only reason I went, was to see all the people from the USN Forums.  I never left Planet Hollywood for 3 days.  One doesn't have to.  I kvetched, and moaned all over Facebook before we left. But I went, and am glad I did. As usual, it all went too fast.   As our plane landed, Bob got a message that Bob Loveless had died.  Bob loveless was like Obe Wan Kanobe of knives to my Bob. 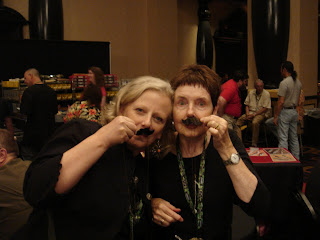 Toni Nealy and I
I had not planned on bringing any jewelry to the show.  It's a social gathering.  I looked at it as a 2 day party.  So I wanted to bring something fun to put on the table.  I had a couple of pieces of horn on my bench that I had been pushing around for weeks while working on other things. It looked like a wavy mustache to me.  I also had this "moon glow" acrylic sheet and a rainbow sheet of G-10.  I've seen mustaches on Etsy, I wouldn't be the first or the last.  So I made a batch of mustache necklaces  out of scraps and the afore mentioned materials.  I had so much fun.  Each one I finished, I would hold under my nose to show Bob.  Who shook his head.  However, he said nothing when I put them on his table.   10 Minutes after the show opened, he was sold out.  So we needed something to fill the space!! 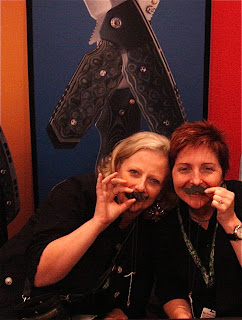 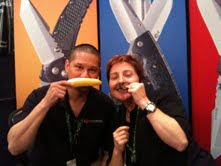 Val and Allen Elishewitz at their booth. His hot new knife project with Hogue behind them.
Allen felt pretty much the same way Bob did about them, so he used a banana!

Owen was all over it! 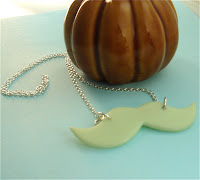 The Moon Glow mustache sold first.  Bob sold it while I was away from the table.  The night I made it, I went outside the shop door and had him take a photo with the iPhone.  It really glows green! I've had this material since last December. Lucas Burnley, a New Mexican knife maker turned me on to it. 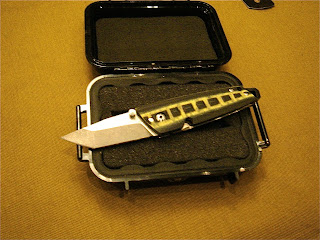 Here's a new knife Luc made with Pat Pruitt for the show.  Pat is a master CNC jeweler. It's Pat's first knife, and Luc's first CNC project.  They made an edition and each guy used their own handle materials.  I really love this layered G-10. Luc also gave me the layered G-10 I used in the top photo.
Luc has a forum on USN: Burnley Knives...check 'em out.
On a more serious note...there was a Brazilian knife maker at the show.  Bob has been oohing and aahing over this man's work on the USN Forums.  Gustavo Thome Cecchini.  I'd like to think his half Italian genes are why his knives are exquisitely designed: and getting an A+ in form and function. 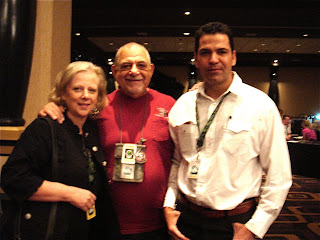 Not only are his knives beautiful...but he is too!
Ladies, he has a stunning wife.
This brings me back to the beginning.  Cecchini's knives are on par with Bob Loveless' work.  I really felt a circle complete Loveless -> Cecchini.  No one can replace Bob Loveless in the knife world. But some will carry the torch.  To see his knives: GTCKNIVES.com .
Thanks for reading!
Every day is a gift: open now.
xo
Suz
PS. Remember the knife I had dinner with  in Atlanta by Todd Begg? Best in show here. I know, I'm just the "knife wife" :-) 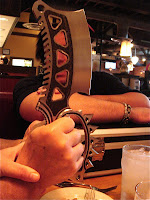 Posted by Polkadotmagpie at 8:01 AM 3 comments