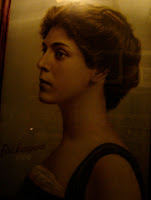 Drew Barrymore's Grandma
We were up at 4:30 AM to fly from Albuquerque to Chicago.  Two and a half hours in a commuter sized jet would have been unbearable.  But Bob and I were so tired...we slept the entire way.  I woke up and looked out the window on a ground covered in white.  My phone dinged to tell me I had a text message.  Our connecting flight had been switched to another gate.  At O'hare...that can be quite a hike.  When I exited the ramp, I couldn't find Bob.  So I walked at quite a clip to make the next flight at the new gate.  I was in the next terminal and looked up at one of the screens to double check the gate.  It had been changed to another terminal. All the while calling Bob on his phone to ask him what his 10-20 was...no answer.   So I high tailed it to the next terminal and saw passengers boarding.  I rummaged through my purse and carry on bag.  No boarding pass.  But the woman at the gate said she'd get me another one.  I continued looking and found it as she printed out the new one.  Of course.

I was one of the last passengers to board.  I came to the seats on the boarding pass, both empty.  Where was Bob?  I put my bag in the overhead compartment.  Sat down and buckled up and tried Bob's phone again.  A young man came and sat in the empty seat.  He told me I was sitting in his seat.  I said I had misplaced my husband, which made him smile.  Then I looked at my boarding pass again because I knew something wasn't right here.  I had the last flight's pass and was in the wrong seat.  I apologized and gathered my things to go to the correct seat.  The young man said he hoped I found my husband.  I walked to the back of the plane and there was Bob standing at the right seats.
"Why were you sitting with that strange man?" he asked.
"I really don't know. I had the wrong boarding pass.  Never mind...where were you? I've been trying to call you?"  I said with fully ruffled feathers at that point.

We took off and flew over the North Shore where I had grown up and lived most of my life.  The lake was glistening and blue.  I could see every skyscraper.  I even saw the Evanston Lighthouse.  Seeing the Lake and familiar landmarks calmed me.  I always feel a sadness when I leave Chicago.  It will always be my home, no matter where I live.

We arrived on schedule a LaGuardia.  The sky was grey and soupy looking.  No line at the cab stand....we were on our way to midtown in minutes.  No traffic, no crowds, it was amazing.  The hotel lobby was filled with "fashion week" guests and "knifemaker guests."  Glaring dichotomies...at best.  So many knife folks and we were happy to meet and greet.  Up in our room the phone rang, friends knocked on our door, and so it begins.  The next 3 days will be a whirlwind.

Tonight we went with Scott and Barbara Slobodian and Niel to Gallaghers Steak House.  The painting above hangs by the coat check.  Framed photos floor to ceiling of celebrity.  I love to see the vintage ones.  Red and white gingham table cloths await platters of meat. 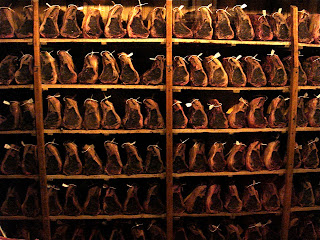 When you come in the front door there is the "room of beef!"  It looks like library shelves from a distance.  I shared my prime rib with Barbara...and here's what 1/2 and order looks like. 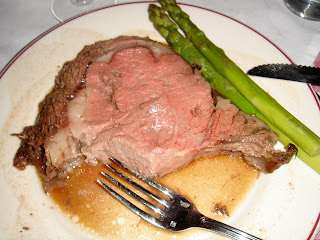 A mural on the wall of sports famoso. 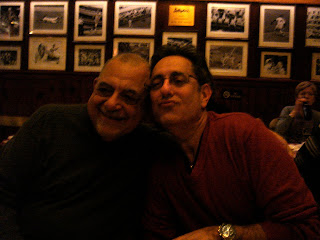 Above is the "Athena" as a frame lock.
Lydia  who is the young woman that drew the "knife wife" graphic came to the show, and I got to see the original drawing for the first time.  Which I am taking home for t-shirts and other graphic goodies.  I introduced her to as many people as I could.  I am so proud to have her art on my blog.  Thanks Lydia.  She's in her last semester at SVA,  and has an incredible future ahead of her as a professional artist.  I asked her to please scan some of her work so I can share it on the blog.  I can't wait!
I took her to the Stage Deli and we got pastrami sandwiches for all.  I got one sandwich for Bob and I to share and one for Lydia.  When the man at the deli handed her the bag she thought he'd put too many sandwiches in...cause it weighed a lot.  So I've had my pastrami fix, and sent her home with he other half.  I had a great time hanging out with her.
After the show we went to Yoshihiro Shapiro's house for dinner.  He is the luckiest dog in Manhattan. 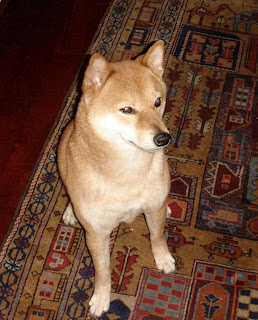 His owner's Rick and Lindsey made a fabulous dinner for us.  Rick stopped at the Italian deli and we had crostini with arugala, prosciutto, parmesan and pistachios .   Then steamed fresh clams.  Followed by whole lobsters!  For us land locked New Mexicans...it was quite a treat.  And of course, I was cracking my lobster claw open and it exploded all over me.  I needed a bib!  Delicious home cooking New England style. 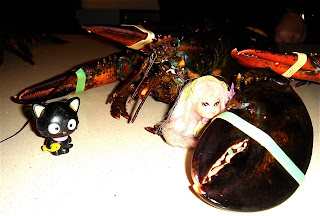 Pre cooking, Linds felt props were needed for my pictures.  As Rick lifted the live lobsters to put them in the pot Linds put her hand over her eyes: "I can't look!"   It was an Annie Hall moment for sure. 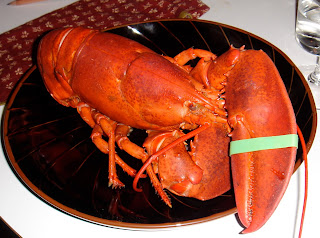 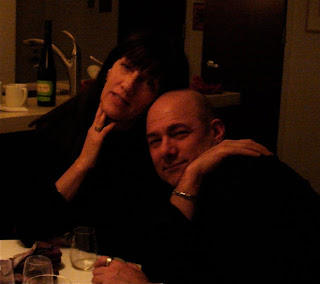 Our very tired hosts: Lindsey and Rick.
We had a fabulous time.  XOXO
We were promised a visit on Sunday by Yoshi at the show.  I hope he can make it.  Everyone will love him.
More tomorrow!
xo  Thanks for reading!
Suz
Posted by Polkadotmagpie at 10:36 PM 3 comments 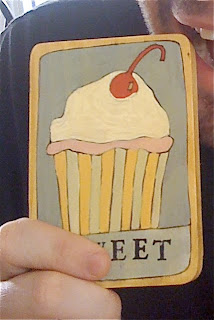 Last year I had the pleasure of baking cupcakes with a good friend I met in the movie biz.  We worked together on Crash, the TV show.  He had told me he wanted to learn how to bake.  So we set up a time to do so which happened to be around Valentines Day. I gots to give you some background of how I met JP. He wears many movie hats: actor, stunt man, set dec.  I hope to see him more on screen in the future.

I worked with his older brother Keith on "Wildfire." I had met Keith on "Trade" a movie with Kevin Klein.  Keith was the voice of reason on the set.  He's an AD (assistant director) and AD's can be pretty gruff, and full of themselves.  But he had an old world southern politeness and I liked him immediately.  When we worked on several seasons of "Wildfire."  Occasionally we had time to talk and he would say:
"You should met my brother, you would love him." "You would get along great with my sister."  When I went to work on "Crash" both JP and Keith were working on it.  And Keith was right. I did love his brother instantly (I'm not alone, everyone loves JP).  We spent a long 5 months working on season one.  Both of them would say: "You should meet my sister, you two would get along."

Well, sister Rebekah came to New Mexico to do a public art project.  We met on Facebook first and discovered a mutual love for Lee Bontecou.  Rebekah's work reminds me of Bontecou. We had the pleasure of having all 3 for brunch one Sunday when Rebekah was here.  Each is so different from the other being fabulous in their own way.  Rebekah made the cupcake "blok" in the photo.  JP had given me a few of her "bloks" and "Cupcake" inspired our cupcake baking.  She also has a shop on Etsy:http://www.etsy.com/shop/rpotterstudio.  Check it out!

So the rest of this blog will be filled with photos of our baking day.  I taught him to make 7 minute cooked frosting and butter cream that we used to frost chocolate brownie cupcakes and coconut cupcakes.  Both recipes can be found in Martha Stewart's Cupcake Book.  JP strapped on an apron and we went to work.  Only a real man could rock a calico apron with such flair. 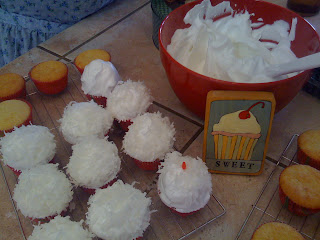 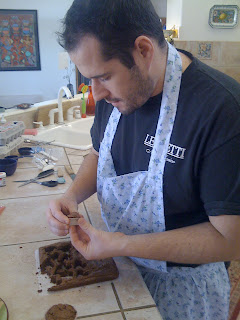 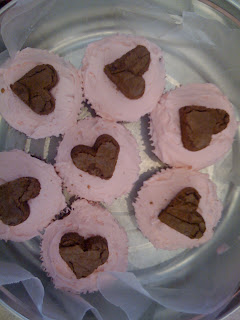 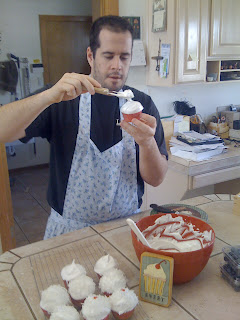 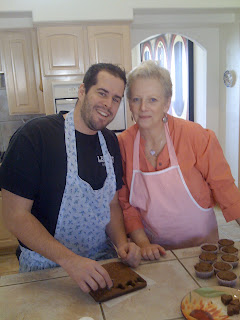 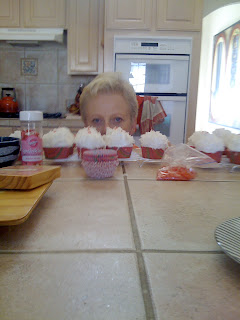 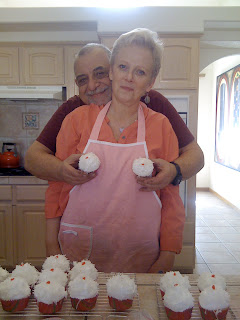 Happy Valentine's Day to all.  Eat something sweet!

Thanks for reading.  I am still amazed that you do.

xo
Suz
Posted by Polkadotmagpie at 9:58 AM 3 comments