It's A Beautiful Life

In spite of New Mexico's very harsh spring.  We have managed a few great days.  This week we were putting a washer and dryer in the guest house.  For Bob this means no more cutting through the shop for our tenants to do laundry.  That will give him great peace, as he doesn't like to be interrupted.  The electrician and plumbers came the same day as "Dave the Neanderthal Pool Man."  Dave opens and closes the pool every year.  However, this year he couldn't get the pilot light to stay lit.
Between the washer/dryer installation and Dave, I thought Bob would lose his mind.   What started out as a gorgeous Spring day, ended with what I call a "hemorrhage of money."  The dryer needed a bigger breaker, and there were none left in the box.  Dave left us with a cold pool, and no definite answer as to needing a new heater.  The next day Dave arrived with a new part. The guys finished the installation.  Neither of us got much work done.  Life.
The morning started out with a garden work, and a chicken visit.  I was working in the garden, watering the newly planted rose bushes, and mulching strawberries.  Our tenant Karen was hanging wash outside wearing her apron.  I was feeding the chickens bread scraps.  We looked as if we had stepped back in time.  I snapped a picture of her and some of the chickens, as well as the roses, and new strawberry patch anti bird netting frame.  It's hinged, so I can lift it up the frame to harvest and work. Brilliant!

In spite of the speed bumps we hit, I feel life is pretty wonderful.  I love my morning routine of watering and feeding.  Karen is a gardener and chicken lover. She's helped so much with yard work, and I look forward to more side by side gardening, and chickening.  It's nice to have a tenant who also feels like a neighbor.  It's a beautiful life.
I checked the pool, and it's warm and ready.  However it's been raining here on and off all day (not complaining), and it barely cracked 50 degrees.  Not exactly swimming weather. :-)

Thanks for reading. Each day is a gift, open now.
xo,
Suz

Posted by Polkadotmagpie at 6:06 PM 1 comments

I saw the movie "Water For Elephants" last week.  In a few weeks I am going on my first trip ever, with my Grandson Ethan alone.  He has always loved elephants .  I think it's because every children's alphabet book has an elephant for the letter E.  Perhaps giving suggestion.  It really doesn't matter.  They are wise powerful creatures, and he knows that. 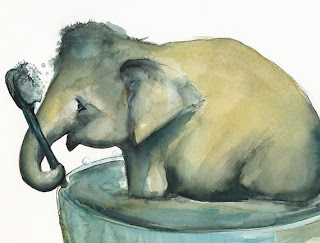 I wanted to see this movie because of our trip.  I had avoided reading the book, as a trip to Borders years ago was met with a woman sobbing reading it.  I am a tough audience.  Working in the movies changed my perspective of how I see them.  At a boring movie I find myself counting camera angles or shots.  Continuity really drives me crazy.  Like when an actor is wearing a watch, and the camera turns around and he's not wearing it. Buttons and mic packs make me want to scream: "hold the roll!"  "Water For Elephants" afforded none of that.  I was mesmerized from beginning to end.  In my mind, the Elephant stole every scene he/she was in.  There is painful cruelty to animals, specially performing animals that is hard to watch.  Here's the link to the trailer: http://www.youtube.com/watch?v=_6b2XhXkPpg 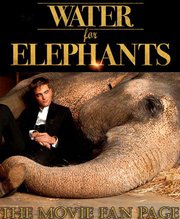 Our trip is to San Andreas California where there is a performing animal rescue "PAWS" that has rescued many elephants.   We get to spend the day with the elephants.  We will stay with my friends who live there (and have gone before) at their ranch.  We'll also see the "Big Trees".  I can't wait.  Ethan is 13, and an old soul.  It will be fun to see it through his eyes. I have never been to anything like this.  So it will be all new to me also.

If you can, go see the movie.
Thanks for reading.
Each day is a gift. Open now.
xo,
Suz


Posted by Polkadotmagpie at 8:47 AM 2 comments 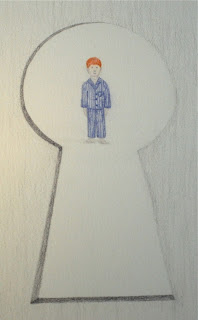 10.)These kids need the most love when they are acting like they deserve it the least.  Love and affection will be accepted and reciprocated if you continue to give it.

When my son was a baby, he was happiest in his swing or in his crib.  Most kids fall asleep in the car, it wound him up. Going to the park usually ended in some altercation with another child. Playgroup was a nightmare.  Most of the time he wanted to be alone.  It was Mommy's idea to go to the park,  join a playgroup, or invite people over.  Eventually, I stopped taking him places unless we had to go. By the time he was 4, not many people even wanted him to come over.  I was isolated, lonely, and pre diagnosis clueless.  He did have a few kids he wanted to be around.  One on one, not in loud groups.  The beach (my favorite) was an assault on his senses: hot sand, cold lake water, suntan lotion, and if it was windy he covered his ears or eyes.  What he really liked was being inside the house playing with our canister vacuum and it's attachments.

One summer the city decided to put in all new water and sewer pipes. Huge backhoes, bulldozers, payloaders showed up one Monday at 8am in front of our corner house.  The crew were all Italians.  At 10am one of them would go to a local bakery or donut shop and bring back a box. They all sat on the grassy parkway under a tree drinking coffee from their thermos' and eating.  Many spoke Italian.  My son was over the moon about the earth moving equipment in his front yard.  By the end of the week he had taken his little lawn chair and parked it in the shade.  He was happy to sit and watch them.  He knew after the first day to stay back.  They worked, he watched...perfeto!  The 3rd week he was eating his lunch outside in his chair when they broke for lunch. Now they were watching him.  He still was not talking, and the workmen tried to talk to him.  I told them his name, and they all told him their names.  Silence, but smiles of delight.

By the 4th week the crew realized this kid wasn't going anywhere.  I knew that
I would be spending the summer with an Italian construction crew.  "Vito" drove the backhoe.  That was my son's favorite.  When the crew left at night, we would let him sit in the seats of the equipment. He was in heaven.  By the 6th week he was having donuts with them. I felt this was good, as he was limited in foods he would eat.  His birthday is in July.  I bought the pastries on his birthday for "their" coffee break.  At the end of the day Vito asked if he could take my son up in the cab and let him drive the backhoe.  Talk about thrilled.  I think he was still smiling when he went to bed.  Vito made quite an impression.  While other mothers were having picnics at the lakefront, I was having donuts with Italian construction workers. But my son was happy, and that made me happy.

Those days seemed far away by the time public school 3rd grade arrived.  I was called every day to come in and talk to some staff member.  I do not exaggerate.  He was in trouble constantly.  We kept a journal with the aide.  Kids taunted him, teachers yelled at him, he was in the principal's office so often that he started fixing the secretary's printer when it would seize up.  The first hour home after school he had to decompress.  I would engage him in a favorite activity, or have a snack once he was relaxed.  One afternoon he was sitting at the kitchen table after school.
"Why am I a boy nobody can love?" he asked.  My heart went into my throat, and I could feel the tears start to come.  I couldn't think of an answer.  So I asked: "Is that how you feel, unlovable?"   He nodded his head, and slumped his shoulders.  This is one of those crystal clear memories we have few of.
All I could do was try to hug him with his stiff bristly posture. He didn't pull away.  I knew at that instant that I had to change that perception, and feeling.  I think I cried for days afterward every time I thought of him feeling unlovable.  It still breaks my heart.  From that moment on I knew I had to love him when he acted the most unlovable.  His behaviors during our divorce were pretty scary sometimes.
Outbursts came often, and he's a big kid.  Somehow, I always forgave him.  Sometimes, I had to go in the other room, as I thought I would lose my mind.  Sometimes I needed a time out.  He taught me to love in a way I had never known love. He was affectionate to me, his big sister, and his Dad. He hugged and kissed us all the time.  And only us.

By the time Middle School arrived,  I was all he had left.  Big Sis was a mom herself living in another state.  Dad had lost all visitation.  We had moved from the farm back to the city.  I walked him from my car in the lot to the front door of his school on a Fall morning.  We said our good byes, and he turned and kissed me on the mouth in front of the entire school and said: "Love ya Mum."  I looked around and the kids were indeed watching.  Now for the first time I realized that he was too big to hold my hand walking into school.  And it really wasn't age appropriate to kiss Mum goodbye in front of school.  This is another crystal clear memory.   We had a little talk, and I think a few kids made fun of him.  As Fall turned to Winter he would say: "Love you Mum." and walk away from my car.  No hugs or kisses.

When I see my son and his fiance being affectionate, it makes me melt.   I hear him tell her he loves her at the end of every phone conversation.  Most of the time when we are ending a phone conversation he tells me he loves me, as he does my husband.  I know he knows we love him. Wherever the school psychologist is that told me he would never show love and affection, nor receive it: I have one thing to say.  I love you for being wrong.


Thanks for reading.
Each day is a gift. Open now.
xo,
Suz

Posted by Polkadotmagpie at 10:14 AM 3 comments