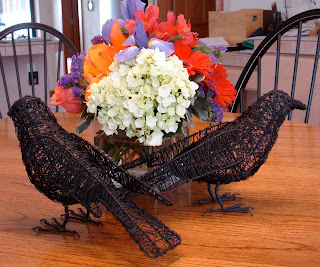 our kitchen table: a sight for sore eyes.
When we left the show hotel Sunday afternoon for Newark...IT started.  Our cab driver missed the exit for the airport, and got turned around on side streets.  His GPS screen dark as we meandered our way to American Airlines.  I saw the weather report for Chicago, our connecting city.  Not promising.  We boarded, they closed the doors and we "pushed" from our gate about 5 feet and stopped.  Our pilot came on and said we'd be sitting as Chicago had low cloud cover.  It took almost 2 hours to take off.

What do you do when this happens?  Nothing.  Years ago I went on a winter trip with some friends from Chicago to Michigan.  While at an Indiana rest stop gassing up, my friend locked his keys in the car.  We went into the restaurant and called a surly lock smith who wasn't too happy about meeting us, but agreed to come.  I saw a pinball machine and looked for change in my purse.  I was merrily flipping away when the "key locker" friend exclaimed: "what are you doing?!!"
"Playing pinball."  I stated calmly.
My friend was so upset at himself.  These things happen.  I handed him a quarter and said: "you play."
He was bewildered by my lack of suffering.  I was impressed by his need to suffer.  We both had a good laugh.  The lock smith hadn't shown up so I walked into the restaurant and asked the staff if anyone had a "slim jim."  No one did, but a cook from behind the counter that looked a bit rough around the edges said he had a coat hanger.  The man skillfully, in the freezing temperatures glided the hanger in and popped the lock.  10 bucks tip, thank you's,  and we were out of there.  The lock smith had over an hour to arrive and didn't.
So sitting on the tarmac I got to know the two women in my row.  One was a foreign exchange student from Portugal.  The other, a young mother on a business trip.  We had a blast.  The young mother asked what I had been playing (Wurdle) on my iPhone.  I handed it to her as I have to many an innocent who soon would be addicted.  She was up to 2400 in 15 minutes.  Hooked, and said she would be visiting an ATT store in Chicago ASAP.  I nodded knowing she meant it. We played a few games of "Set."  My time flew as we eventually flew.

As we got closer to Chicago I could see nothing but white.  I was resolved at this point to having a sleep over in my home town.  The Hilton O'Hare gave us a discount.  We had a lovely dinner, a movie in our room.  We made the most of it.  It was the same as being stuck in Indiana and playing pinball.  It just cost more quarters.  A toothbrush, toothpaste, comb, and razor...$7.  What a deal.  No shower, no clean clothes, lots of rescheduling, and we boarded a 10:30 flight the next morning...at 11:30.  The snow was still falling, heavy clouds prevented any last views of Chicago from the plane.  Thank goodness JP our friend and animal sitter was able to stay.  xo to you JP! 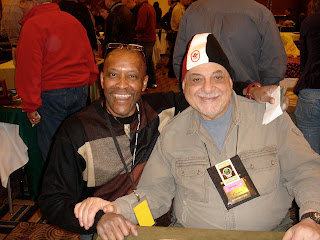 A few last photos of NY knife show.  I got my meteorite hookup.  Above is a photo of Bob and the Meteorite man: Charles.  The Papa Smurf look is compliments of Niel from True North Knives.  He's a proud Canadian and gave Bob the Olympic hat.  When Bob saw the picture of himself he said: "oh God." 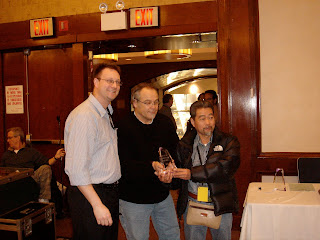 Above Steve D'lack in the middle presenting the Buster Warenski award to Koji Hara and a Swedish knifemaker, Anders Hedlund.  In the back to the left is my new friend Scott who showed me some of his Torelli Pens, watches, and flashlights!  He happened to be at our table when Rick and Lindsey came by.  Scott and Rick bonded over an LED flashlight that is called something very Star Trekish...right Lindsey? :-) 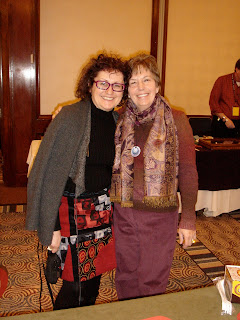 Above are two other "knife wives":  Joyce Minnick (R) from Indiana who works with her husband and does all the decorative engraving, and inlays on their knives.  She is a fabulous bronze sculptor.  I got to see her newest American Indian piece in the clay stage.  On the left is Nicole Reverdy from Paris.  She too is a bronze sculptor married to knife maker.  She is a "glassaholic" like me...always wearing kicky spectacles...a woman after my heart.
We have a new table location.  We moved into the honored spot Frank Centofanti had for as long as I have been coming to this show.  I would have given almost anything to have Frank back with us.  I really miss him.  He constantly teased Bob and made me laugh.  On Friday I went to the hotel gift shop and bought a pack of green Extra gum in his honor.  But it just wasn't the same without Frank. :-(
The lovely Lydia delivered the "knife wife" illustration.  Now I can get t-shirts, etc. made.  She got to meet some of you. I loved seeing all the people I know from the USN forum.  Barbara and Scott Slobodian were there after a long absence from our show lives.  I met new people too, and I'd like to name some.  But if I forgot a name, I'd feel terrible. SO YOU KNOW WHO YOU ARE!   Time runs so fast at these shows.  Until the next one, and we meet again...
I am home sweet home: Buddy at my feet, Columbus the cat head butting the laptop, two other cats watching my every move, and Bob is out in the shop grinding something...I can hear it.
Thanks for reading.  I'm still amazed that you do!
xo
Suz
Posted by Polkadotmagpie at 11:39 PM 3 comments