Knives For The Columbians 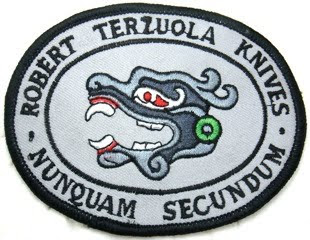 My husband Bob wrote this on his knife forum.  It's such a tale, that I thought I'd share it with others.
✄✄✄✄✄
So here is a story from my Guatemala days, when I first started making knives as a serious venture.

I was the general manager of a Jade jewelry shop in Antigua Guatemala in the early 80's. I set up the shop and taught the people there how to work Jade: carving, polishing, etc.
I started making knives as a hobby since much of the machinery for working Jade was similar to knife making tools. Naturally, some of the knives would have Jade handles since I was surrounded with the stuff in great quantities and a good variety of colors.
Somehow, an electrical contractor in Miami, "John", saw my work, liked it and would order knives, with Jade handles, from time to time.
One day in early 1982, "John" called from Miami and said that a friend of his from Colombia had seen the knives I had made and wanted me to make him a set of three knives, large, medium and small, all with black Jade handles and sterling silver pins, in a fitted case. I said I would do them and quoted a price which I thought was exhorbitant at the time, $3500, (1982 dollars). He agreed and I started on the project
A week later, "John" called back and said, "make two sets, identical".
I worked on those knives for about two months. The Black Jade I had cut from one single stone was the hardest of all the Jade varieties, a type known as Chloromelanite Jadeite. The Maya had prized this material for its toughness and used it to make "celts", an archeological term referring to hatchet shaped tools used for carving limestone on their temples and monuments. A Black Jade, Maya celt can sell today for upwards of $5000.
But I digress.
I called "John" when they were finished and asked if I should ship them to him in Miami as I had done before.
He said no, the Colombians wanted to meet me in person and were sending me a plane ticket so I could hand carry them and join them in Miami when they made their next visit from Bogota, which they apparently did about once a month.
Sooo, on the appointed day, I packed my bags and the two sets of knives and off I went to Miami, where I made quite a splash with the customs agents who all wanted to see the knives and called their buddies over for a looksee. No problem they told me, they just wanted to admire the work. Apparently, one of them recognized my name and hoped I would have some goodies to check out.
I arrived at the motel they had set up for the meet, without incident.
It was a small, very "Miami" motel. Clean, painted pink with fake flamingos on the neat, trimmed lawn. A well dressed gentleman showed me to my little cabin right off the road, asked me to wait there, (in Spanish) and left, leaving the door open.
I got some clean towels, set them on a sideboard and laid the two cases of knives out as a presentation.
After about 15 minutes, a long Limo pulled up to the cabin and out stepped two of the most well dressed, handsome men I had ever seen. Tanned, coiffed, manicured with Armani suits, polished Italian shoes and silk ties, one pink, the other purple. They wore several gold rings, gold cufflinks and I noticed that each had identical Rolex "President" watches: solid gold and ringed with diamonds. They were obviously brothers, possibly twins.
They greeted me warmly, told me how much they admired my work and we spent a few minutes chatting about this and that, all in Spanish, which they said I spoke very well. Their Spanish was very Colombian: clear, unhurried, educated and melodious. It is an old world custom to greet, chitchat and exchange pleasantries before proceeding with business.
At last, they turned to the knives on the sideboard and became almost giddy with joy. They loved the knives, fondled the Jade tenderly and were embarrassingly effusive with their compliments.
After about ten minutes of this, they packed up the knives, thanked me again for my work, hugged me warmly, and left.
Just like that without ever mentioning payment !
By now, I had guessed who I was dealing with and held my peace as they glided into the Limo. After all, a trusted customer had vouched for them.
As they got in the car, the driver stepped out and walked into the room offering me a crumpled, brown paper bag. He said that they were very pleased and that my work had made them happy. He doffed his cap to me, got back in the Limo and off they went.
Inside the bag were rolls of used, $100 bills. $7000 in total, just as agreed.
You could almost smell the Cocaine on those bills, or maybe I imagined it, who knows?
I never saw the Colombians again, nor the knives until one set surfaced in the hands of a dealer/collector/ entrepreneur I had known for years.
I think both sets are in the U.S. now but I am not sure. I believe they were acquired through a Customs/DEA auction but I am not sure of that either.
The one set that I know of is now in the possession of Larry Brahms who was kind enough to send me the attached photos . Maybe, if you ask him nicely, He will show them at the Gathering, coming up.
Hope you enjoyed this little bit of history.
BOB 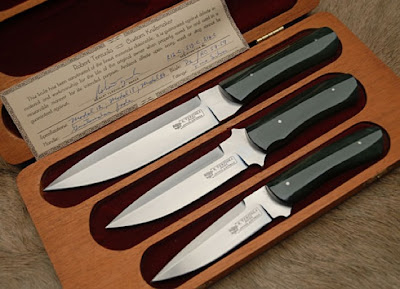 "Knives for the Columbians"
✄✄✄✄
Thanks for reading.
Every Day Is A Gift!
xo
Suz
Posted by Polkadotmagpie at 8:12 AM 2 comments

When Did I Become a New Mexican ?? 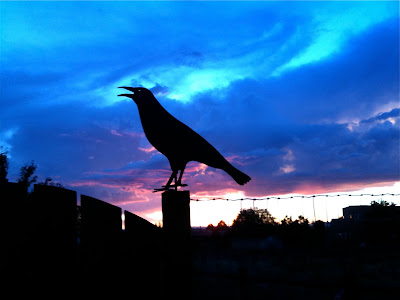 Sunset from my garden
Nine years ago this summer I moved to New Mexico.  I packed my jeep to the top and drove by myself from Chicago with 2 cats, one golden retriever and a tarantula.(sounds like the old song "Sweet Betsy from Pike)  My son was at camp, and would meet me in a few weeks at the Albuquerque Sunport.  The movers would arrive within a week.  I moved here because there was a private school for my son that taught dyslexic kids.  At 12 he was not reading...and I had had enough of Illinois Special Ed.  He had to learn to read and write, and time was running out.

My parents called me constantly while I was on the road.  They rung their hands and shook their heads about their daughter, "a woman all by herself" crossing the county, and moving to a state they knew little about.  We had driven through New Mexico on our "Route 66 Tour" when I was 8.  I guess I was asleep, as I didn't remember a thing. I had one acquaintance in Albuquerque.  When I drove through Oklahoma it was over 100 degrees.  When I arrived at my rental house is was 107 at high noon.  I thought to myself: "I've really done it this time!" 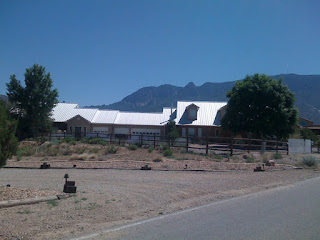 We face the Sandia Mountains
Faith eventually over came my panic attacks and I settled in.  My son arrived sooner than later, and began his 18 month term at the year round school.  On a hot August morning I went to the local Albertsons.  When I got out of the car I smelled the most incredible smell.  A mixture of smoke, sweet, and spice.  Like a cartoon character  my nose followed the white trail of smoke to a man in the parking lot turning a black cage over a fire.  In this screened cage were green chilies roasting.  "This smells AMAZING!" I exclaimed to a man who was roasting himself on black pavement over a fire. "Mmmmhmmm" and a nod was all I got.  I went into Albertsons and could smell  the roasted green chilies on my shirt.  I ended up buying an entire burlap bag. Hovering around them as they roasted like a dog at feeding time.  I had no idea what I would do with these roasted beauties...and I didn't care.  The internet provided me with the answers and recipes. 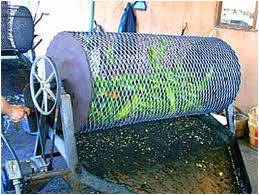 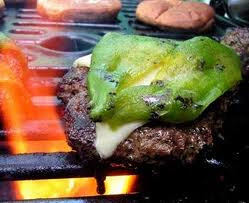 I can't eat a cheeseburger without a roasted green chili on it.
Recently we have had lots of visitors who are here for their first time.  One said: "I feel like I have landed on the moon!"  My response was: "this place grows on you."  I can say that goes double for me.  Albuquerque is sunny most of the year.  Rain coming only in summer, and occasional snow in December (although we did have a 24" once).  There is no sense of urgency here.  Some call it: "the land of manyana."  I call it the "land of whenever."  There are arroyos that are dry ditches most of the year. When it rains they flood, cross main roads, and close many.  Within hours the water is gone. There is nothing like the smell in the desert after a hard rain.  I swear you can hear the plants drinking!  A few days later cactus bloom, and wild flowers seem to pop out of nowhere. There are O'Keefe paintings everywhere I look. 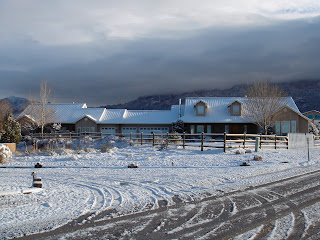 I had to take this photo at 8 am...the snow melts in an instant, once the sun comes out. 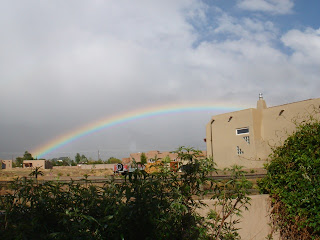 Double rainbows are almost a daily occurrence  in summer.
I came from a city known for it's architecture, and lake front views.  Where gray overcast skies are a way of life, and beg for Prozac.  I now live in a place where there is almost no architecture, and little water. I don't seem to mind it anymore.  Because I am looking at the Sandia Mountains that change color and texture all day long.  I feel like they are looking back at me.  From my front porch I can see the Bosque along the Rio Grande river, and 50 miles past that.  From my deck I can see even further, and need binoculars to see the horizon.

Blue skies, humming birds, road runners, painted horses, and red chili ristras are an every day event.  Even though I still move at lightening speed...it's slower lightening speed.  Slow enough to watch the sunset show every evening. Slow enough to notice cloud formations.  Slow enough to stand out in the rain and smell that wonderful aroma.  Sandia means watermelon in Spanish...the mountain turns watermelon  pink just before the sun slips into the west for the night.  Our  house turns pink inside for about 5 minutes.  As I type this, the mountains are in back of my screen...almost a distraction.

Red chili ristras
When did I start to love hot and dry?  When did I begin to crave the taste and smell of green chili?  When we travel I get a claustrophobic feeling when I can't see the horizon.  When did the landscape become more important than the buildings in it?  I look forward to Spanish Market,  Indian Market, and Balloon Fiesta like they are Christmas. When did I cross the line and become a New Mexican?
I can't say.  All I know is that I'm here now, and I'm not going back.  I don't mind that my blonde hair and blue eyes say to all:"she's not from here."  I'm here now.  That's all that really matters. 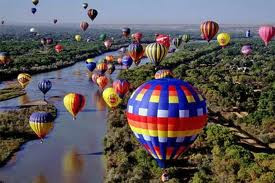 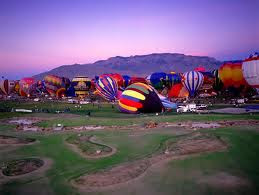 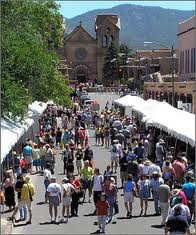 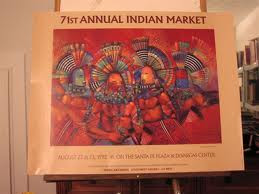 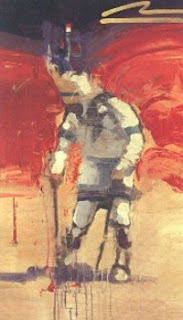 Thanks for reading.
Every day is a gift!!!!!!
xo
Suz
PS. My son learned to read and write. :-)
PSS The name of the school in Albuquerque is DLD. They use other neuropathways to teach reading.
Posted by Polkadotmagpie at 10:59 AM 6 comments