When Collaboration Turns Into Genius 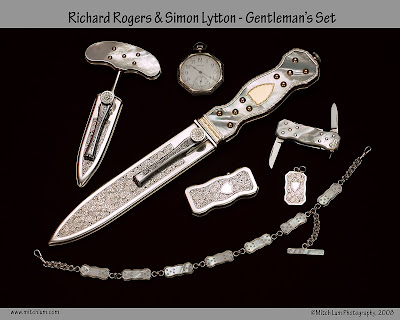 One of our New Mexico "Knife Nuts," Richard Rogers read an article in a magazine about gentlemen of the old west.  He was inspired to make a "Gentleman's Set" and asked Simon Lytton an engraver from London what he thought.  Simon encouraged Richard to go ahead and make this set that he would engrave.  It would be shown at the Plaza invitational in September of '08.  Simon collects and sells antique knives, as well as engraves knives for contemporary knifemakers.  So it was a perfect match of two master craftsmen. 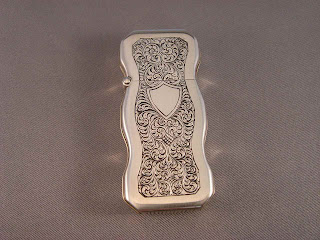 Close up of Simon's engraving. 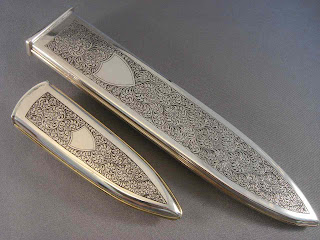 More close ups of the set and engraving.


When one picks up one of Richard Rogers knives, they are brought back to a time of elegant craftsmanship.  His knives are graceful, perfect in proportion and scale.  The folding styles seem to glide open and shut.  Amazingly, he is one of the knife world's unsung heroes.  He's been making knives since 1996. He runs a cattle ranch in Magdelena New Mexico with his wife Sally.  Currently showing at the Blade show in Atlanta: table 2F.  Stop by and see this "Gentleman's Set".  I was fortunate to see it at one of our "Knife Nuts of New Mexico" get togethers. 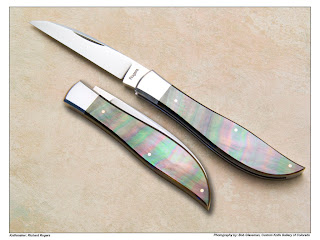 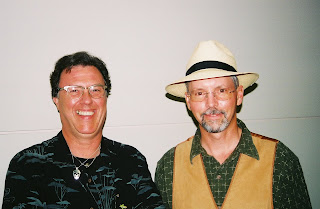 Simon Lytton and Richard Rogers
(Simon wears my skull all the time!)
Simon Lytton has engraved knife handles and bolsters for my husband Bob Terzuola for over ten years. He does traditional scroll work as well as Japanese motifs.  He has engraved  high end hunting rifles  and shot guns. I was given a sterling pill box, pendant, and then purchased a large cut work and engraved pendant that I consider one of my signature pieces of jewelry.  I am always fascinated by the antique pieces as well as his modern adornments on Simon's table.   I hope for him to engrave skulls and birds to sell at my Etsy shop. 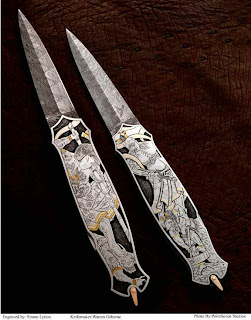 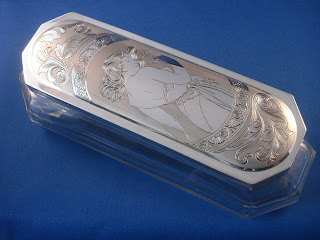 A box with a sterling engraved top by Simon Lytton

Richard Rogers' knives are sold at Bob Neal Custom Knives: http://www.bobnealcustomknives.com/.
As well as many knives engraved by Simon Lytton.
If you are interested in contacting Richard or Simon: I'll forward your email address to them.
Write me at polkadotmagpie@gmail.com

Thanks for reading. I'm still amazed that you do.

"You Don't Take A Picture of An Icon's Butt" 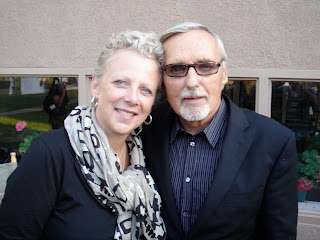 I knew today was coming. I had plenty of warning.  I saw it in Taos over a year ago, then "The Walk of Fame Star coverage," finally the tabloids at Albertsons.  When I got the email yesterday morning I was shocked. It's as if I never saw it coming.  "Dennis is gone."  Our conversations had been brief over the last year. But, "gone?" That's it?  He's an icon for God's sake.  Dennis Hopper made his transition May 29th, 2010.

I met him working as a costumer (his) on Season I of "Crash."   The first night we were shooting with Dennis was a magical night.  Our DP, Russell Lee Fine had lit Dennis' character's Limo with a box shaped light that hung from a crane. It looked as if the black car was about to be lifted by a tractor beam of light.  The lights of Albuquerque twinkled in the background. For the 3 seconds we saw it on TV, it was LA. 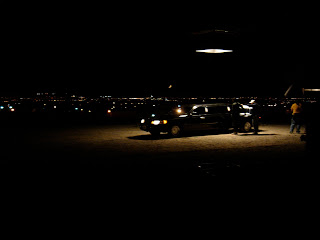 Setting up the night shot with the limo.
The crew had been giving updates regarding Dennis Hopper's proximity to set.  "Mr. Hopper this, Hopper that, 10 minutes 'til Hopper" buzzed on our radios.  I had never worked with a true icon before.  I didn't IMDB him, as many would.  My boss, our costume designer Amy Stofsky had worked with him before and said he was a professional to the bone.  The closer he got, the more the word "Hopper" buzzed out of my radio headset.  I kept getting an image of a bunny every time someone said "Hopper."  When I left the wardrobe trailer to meet Dennis Hopper I said to my crew: "going to meet The Bunny now."  They laughed because it broke the tension. 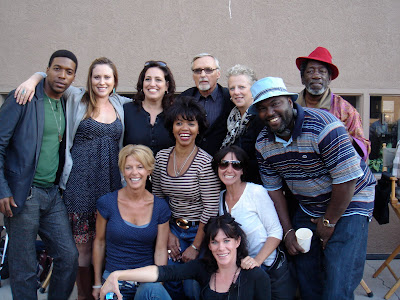 Some Cast & Crew  of Season I
L -> R
Jocko Simms, Liz Lash, Terri Ann, The Bunny, Me, Huggy
Blair, Shannon, Beth, Jen McPfiefer
When I stepped into his trailer Satya, his assistant greeted me.  I glanced past him and saw the most incredible twinkling blue eyes looking at me.  I said to myself: "Now I get it.  Those are some amazing eyes. Paul Newman, step aside." I introduced myself and said that I knew he was an artist and collector as well from an article I read in the NYT years ago.  I offered that I too was an artist, but one had to earn a living.  :-) At that instant we clicked.   So began a mutual endearment, and a most memorable working experience.  I continued to call him "The Bunny." 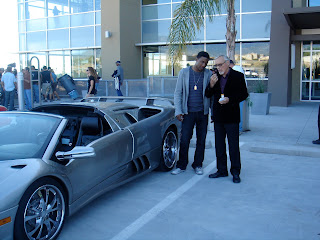 Jocko Simms, Dennis Hopper between takes doing a radio check.
As a costumer, I had to keep a record of what my actors wore in each scene. I learned early on that jeans from the front all look the same in photos.  But the pockets on the back are usually different.  So I always take a "butt shot" for continuity.  When I was getting my first continuity photos of The Bunny I did not take a photo of this icon's butt. I would do it later when I wrapped his costume.  My set mate asked if I got a shot of the pockets of his jeans.  "You don't take a picture of an icon's butt!" I replied.  We had many a laugh about that during Season I. 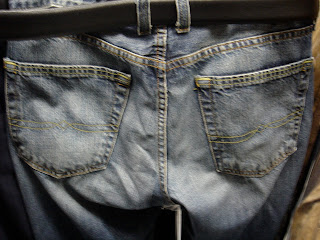 The jeans that I did not take a butt shot of!
Bob made a knife for this episode. Our director was Stanford Bookstaver ordered a mastodon handled knife for "Ben Cendars" character.  Ben was to pull the knife on a man in the back of the limo. (Oh, the limo, we shot a lot in the limo.)   Dennis was so impressed: "your husband really made this?"
We talked that night and many a long day about art, marriage, our kids, movies, our love for New Mexico, his dog, and art.  When Dennis visited Bob's shop and my studio. "You are both masters!" he exclaimed. 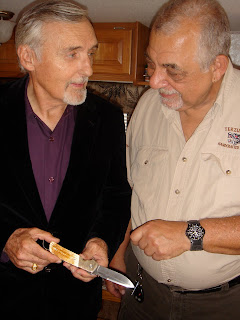 Posing with Bob and the knife which is upside down
and it looks as if Bob is about to give him a little poke.
I was not alone.  Cast and crew loved him, and the camera loved him also.  It was a good day the days the Bunny worked. One day while I was in his trailer I showed him some pictures of my prints. He shared with me that he had never made much money with his art.  But that was where his heart and soul was.  We would use my iPhone to look at his work, my work, and other art shows around the world that interested him.  He pointed to my "Winter Solstice" piece that has 3 women around a fire.  He looked me in the eye, pointing at my phone and  said: "If you can do this...why are you doing this?" Now pointing to my radio that kept me tethered to production on set.   I was dumbstruck...speechless.  He cautioned me about time running fast, and shared his personal experience.  "You have talent, a husband you love, a beautiful home, fabulous studios. Why are you here?"  So I did what the man told me to do.  I started a jewelry company and pulled my IATSE membership. And took a pass on Season 2.  He was so right. I have never looked back. 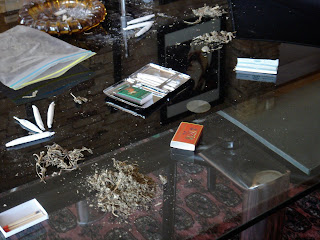 Dennis somehow found out I called him "The Bunny."  He jokingly told me no one had ever given him a nick name that he knew of.  I was kind of embarrassed.  I told him it calmed me the night I met him. It sort of took the icon wind out of the sails.  He liked it and laughed his Bunny chuckle.  We got on as work mates.  That's all.  Mutual respect and a sense of humor got us through scorpion wrangling, poop on the stove, strippers, water boarding with pills, limo rides,  props joint rolling,  stupid producers, and sweltering heat, the dust of a New Mexico summer.  He was the consummate professional, always. 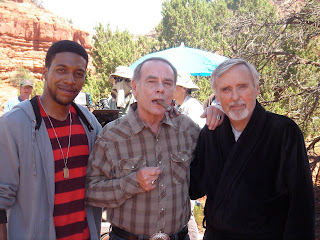 A "Blue Velvet Reunion" I called it.
Jocko Simms, Dean Stockwell, Dennis Hopper
I could regale many personal stories of our time together on and off set.  But I can't without crying now.  I drove by an office building yesterday that we shot almost every episode. Dennis' character Ben had his office in that building. I sat in my car in the parking lot sniffling and trying to get myself together to finish my shopping. I know I will always think of our times together when I drive by it.  Out on the balcony away from the hot lights. Dennis smoking a cigar, and sharing with each other our love of art. 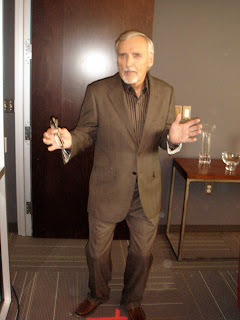 Just one of many photos where he is making me laugh!


Bunny, I hope that you are in a painless place, where you can make art in abundance, a place you are loved and at peace for ever more.  It was an honor working together.  I give you my promise that some day sooner than later, I will paint a body of work from the photos of our time together.
With love and respect,
Suz

*** On June 2nd, 2010 Dennis will finally come home to rest in Taos New Mexico.
Sleep well Bunny.  I'll see you on the other side. xo
--------------
On July 11th at the MOCA in LA  there will be a retrospective show of his work he helped curate:
http://latimesblogs.latimes.com/culturemonster/2010/05/how-is-jeffrey-deitch-getting-dennis-hopper-double-standard-together-so-quickly.html
I will be there, as I know his art was his soul.  He may be gone, but his art and his movies will prevail.
Posted by Polkadotmagpie at 7:48 AM 13 comments