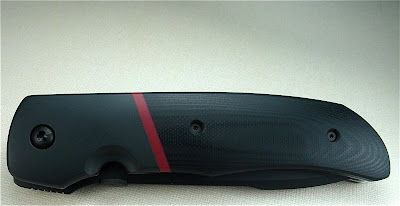 Where I grew up in lilly white waspy suburbia: no one hung out on street corners.  No one had nick names.  Frankly, it was pretty dull.  I guess if you're going to raise small children-- dull is okay.  So whenever Bob makes a knife with a "pinstripe" I smile.  He pinstripes his knives??  Well, sort of.  Bob likes cars with pinstripes too.  He has put pinstripes on his last two cars.  Red.  Mmmm hhhmmm, I can see my mother and brother rolling their eyes.  But I dig it.  Not pinstripes, but the fact that my husband HAS to put them on his cars. The only pinstripes we agree on are on suits...Bob tends to lean toward the chalk stripe old school gangster type.  I like the courtroom razor stripe myself.  Neither to be found on one of his knives.

Bob grew up in Bensonhurst, a neighborhood in Brooklyn New York.  He tells stories of working at "Sammy Honda's," who sold motorcycles.  There he met "Johnny Pinstripe" and "Frankie Wheelchair."  "Johnny could paint a straight thin line like nobody else," Bob recants.   "Frankie Wheelchair" was in a motorcycle accident and hung out in his wheelchair at Sammy's.  Oh, and there was "Slow Charlie" who was mentally challenged and was a genius at welding.  He would come and go.  When he returned, he'd sweep Sammy's floor.  Sounds like a scene out of Larry McMurtry's "Last Picture Show."    Frequently I hear someone call my husband with a New York accent: "Bobby T!" Today when I saw the knife on Bob's bench with a wide red pinstripe--I said: "Johnny Pinstripe" lives on! 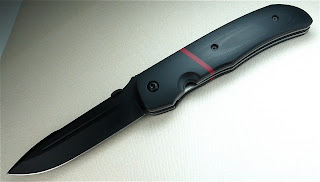 For you knife nuts here are the specs.  It's an "Eagle Rock", cermat bolsters, black G-10 with a red G-10 pinstripe. 4" black coated blade, and black clip, thumb disc, and spacer.  It's going out to BladeArt in Miami. It's a beauty! 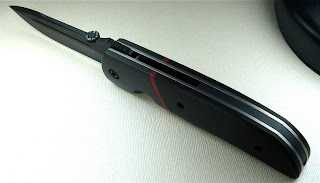 Thanks for reading.  I'm still amazed that you do.